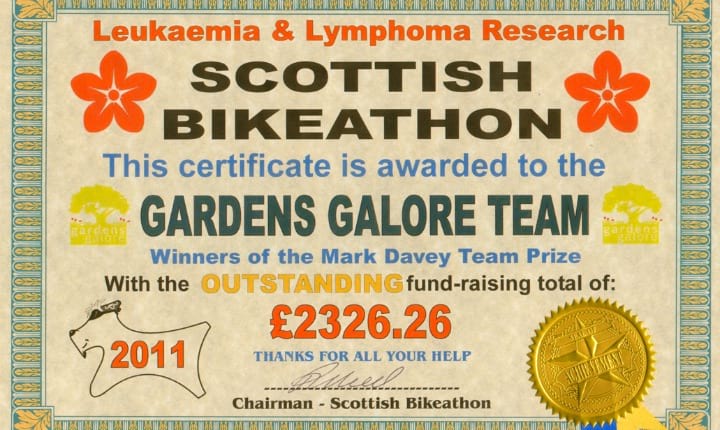 The Gardens Galore team were delighted to be informed that they had won the Mark Davey Team Prize for outstanding fund-raising following their participation in the Scottish Bikeathon this year.

Managing Director, Jim Byiers, commented: "We were runners up for the prize last year and we were delighted to hear that our fund-raising efforts this year had resulted in us being awarded the Mark Davey Team Prize.  Our team worked really hard to raise sponsorship and we are grateful to all the friends, family, suppliers and customers who supported us."

Gardens Galore will receive a quaich to mark the award.  The award was first sponsored by Grampian Police in memory of one of their officers, Mark Davey, who was killed in an accident on duty.  Mark and the Grampian Police team had taken part in the Bikeathon the year he died.  Mark's young daughter had died of leukaemia and he was a great supporter of the fund.  Grampian Police sponsored the award for ten years and then latterly Mark's parents have sponsored the prize.

More information on the Scottish Bikeathon at the Charity website: http://beatbloodcancers.org/near-you/scotland.